From Grass to Grace: Unlocking Opportunities 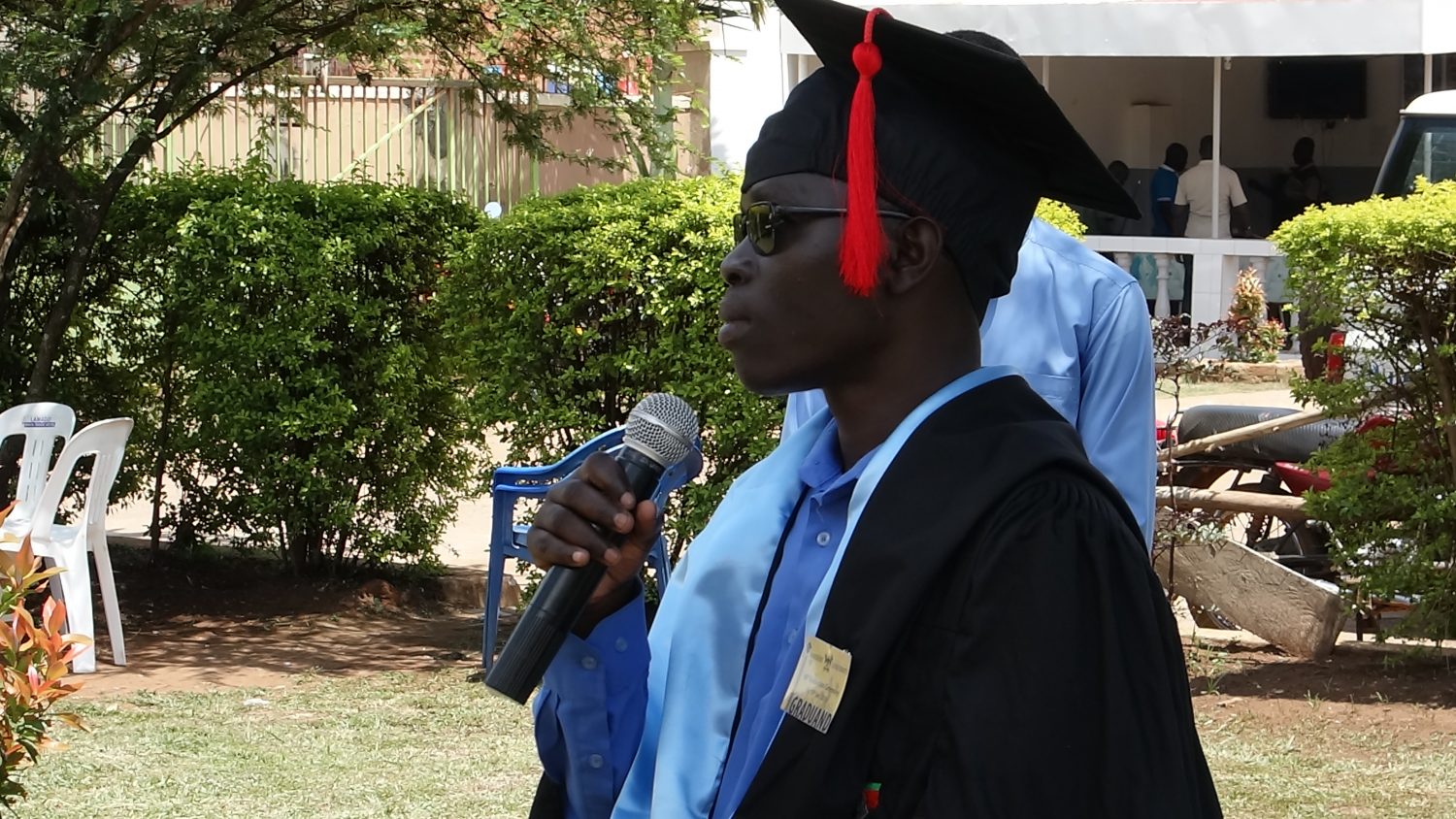 Denish was born a healthy baby  in Gulu in 1993, just after the beginning of the two decades’ long war that would spread and rage across the northern region of Uganda. A measles epidemic broke out and spread across his village resulting in the deaths of many infants and children.

Denish, too, contracted the disease which eventually affected his eyesight and slowly led to blindness. He recalls losing his vision: “I kept knocking things and some people through I was only being a pretender.” Due to the lack of education about the effects of the disease, many people struggled to recognize its impacts. “It took time for realize the dread that the disease had brought.” Denish continues, “This was because my eyes looked so clear and it seemed like there was no problem. They blinked like someone who sees properly.”

In the early 1990s, Denish’s father passed away and his mother left him in his grandmother’s care in the Internally Displaced Persons (IDP) camps. He recalls his time in the camp as horrifying.

At the time, locals would move back and forth between camps and villages, mainly during the night. Denish explains:

During the conflict, many schools were displaced. At the time, school fees were paid in cash and food donations: a requirement of 25kg each of posho and beans and 45,000 Ugandan Shilling were necessary. Despite his family’s inability to contribute, the school allowed Denish to continue attending classes at the primary level. As the conflict died down, however, the school administration became more stringent on school fees, requiring that parents or guardians make payments.

Denish had been taken from a camp to live with relatives, where they neglected to pay his fees believing that his education wouldn’t amount to anything. Instead, they would avoid taking him to school, passing off the responsibility by saying they were too busy in their gardens.

Eventually, Denish was brought to live with his uncle in Gulu town, who advocated incessantly for his education. His uncle took him for an interview to be considered for a program that would fund Denish through his secondary schooling.

In 2008, Denish was admitted into HANDLE’s Sponsorship Program under the funding of Omoana Switzerland.

He learned of his admission to the Program when his name was called out on the radio. “I couldn’t believe because I had no idea of joining secondary school. No idea, no hope,” Denish remembers. Through the program, Denish received funding to cover his school fees and special expenses related to school, such as special paper to take notes and complete assignments – material that is very costly and inaccessible to many in the north. HANDLE also provided a guiding hand to Denish, providing advising services and encouragement through mentorship to help keep up his motivation and to follow his progress.

Through his hard work and dedication, Denish passed his A-levels and successfully went on to complete his Bachelor’s in Social Work and Administration, where his tuition was covered through a government program. HANDLE continued to support Denish throughout his undergraduate career by upgrading his computer, purchasing him a brailler (a machine to assist him to write), as well as special writing paper.

Having finished his degree, Denish says that his world has been opened to new opportunities. Currently, he is working with an educational centre training students on how to succeed in exams as well as guest lecturing at schools. Denish excitedly exclaims:

My achievement all looks like a dream to me! I can’t imagine that I am now a graduate and a holder of a bachelor’s degree. I used to think that when you come from a family that is absolutely poor, nothing good can come out of you. It is amazing, delightful and glorious.

Although Denish has been through more than many can possibly imagine, the hope for a better future is what has kept him determined to keep pushing forward. Denish says without the support of HANDLE and Omoana, he wouldn’t know where he would be today, and even questions whether he would be alive. HANDLE is so proud of all the extraordinary effort Denish has put in to continue pursuing his education and we wish him every success in the future.